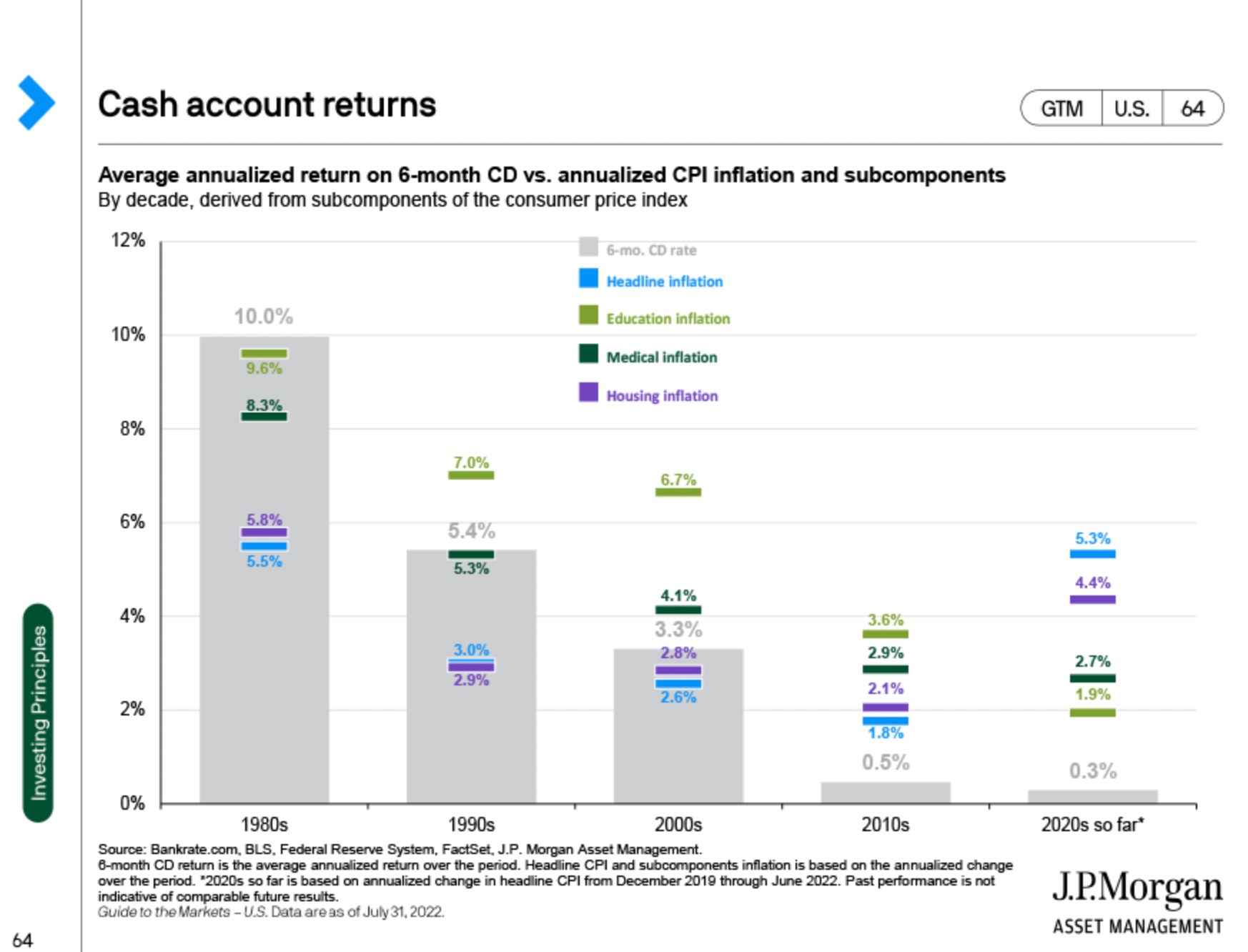 Parents do their best to teach their kids courage -  a virtue worthy of life implementation.

As we know, an act of courage is not fearless. The very definition of courage has fear embedded within it. Merriam-Webster defines it as a “mental or moral strength to venture, persevere, and withstand danger, fear, and difficulty.”1

Unfortunately, some of us who may be quite courageous people in other spheres of life do not apply that virtue to finances. We fail to act in risk and settle for safety.

We see risk as a scary green monster to be avoided at all costs. We treat safety alone as wisdom.

Wisdom, though, is courageous. While it is prudent, it is not entirely risk averse.

The JP Morgan chart above demonstrates the problem one faces if one’s finances are only composed with cash, CDs, and savings accounts.2 You can’t overcome inflation as it comes at us in all its various kinds when earning under 1% at your favorite bank.

You might have been able to argue for hoarding cash in the 80s and 90s, but it’s hard to do so now.

Financial courage does not mean foolishness. You should not jump out of an airplane without a parachute. Emergency funds and available monies are necessities.

Yet cash alone will not defeat the enemy of inflation. Confronting this enemy with only cash is like going into battle with only armor.

Your armor of cash will only last so long…eventually your finances will get hacked to death by inflation. You should use other financial weapons. Consider the sword of stocks (and/or other kinds of investments). Stocks, for example, have returned at an annualized rate of around 10% in the S&P 500. Historically, that’ll slice up inflation and then some.

Courageous warriors aren’t stupid. They wear their armor. They have their cash. They also bravely carry appropriate weapons of risk that just might reap wonderful rewards.

They also will not sell their investments based solely on their fear. If you don’t need the money, why would you sell based on fear alone?

If you tell your kids and grandkids not to let fear dictate their decisions, why would you let it dictate your investment decisions?

Financial wisdom is not safe. But it is brave.

1. https://www.merriam-webster.com/dictionary/courage
2. "Guide to the Markets"