The Stock Market, The Mid-Terms, & Your Investment Decisions 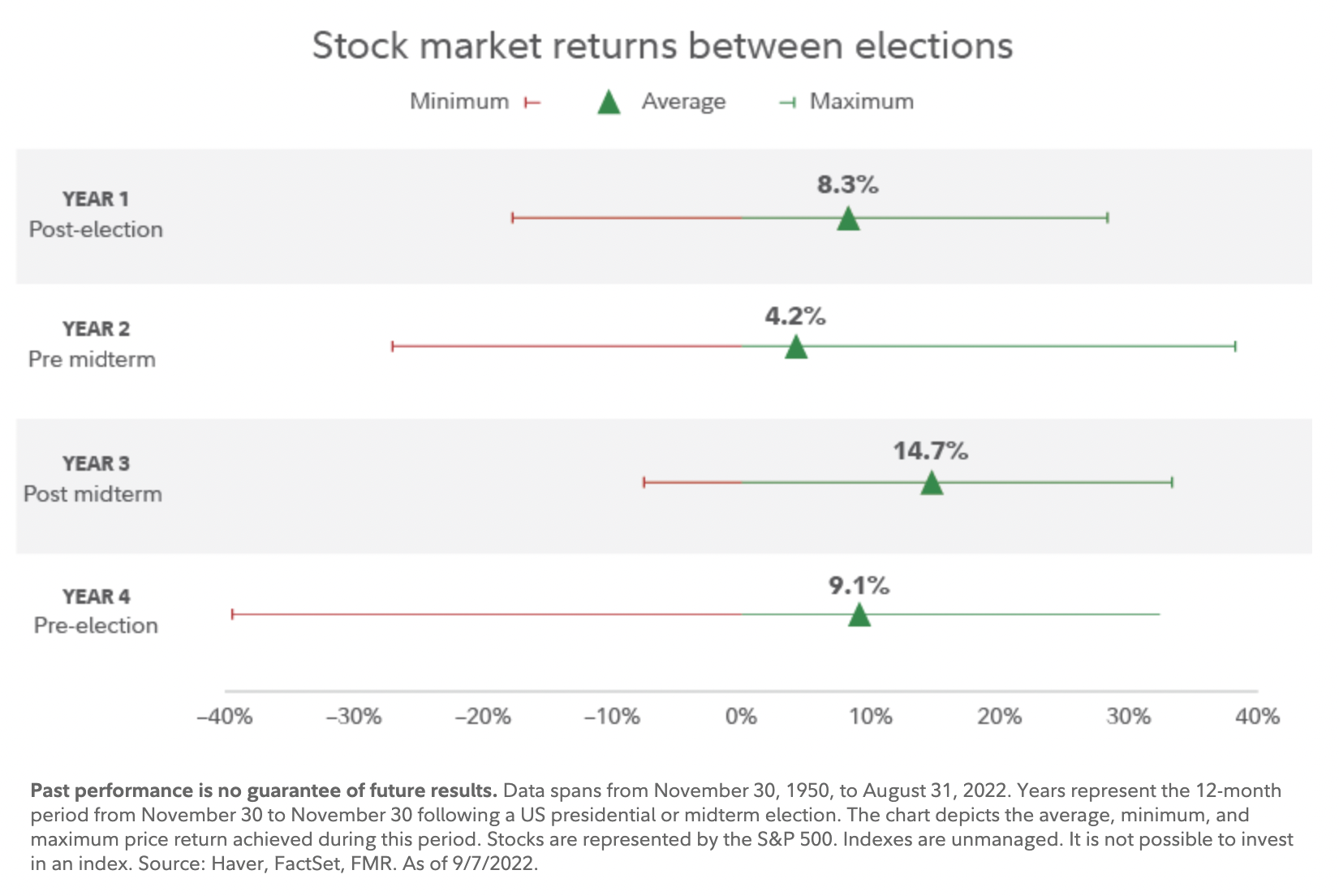 After being an advisor for nearly a decade and a half, I’ve learned one thing about people’s opinion on where the market might be headed—it’s wed to their politics.

Most admit that they don’t know where the market is headed. It’s just that their general outlook is often formed more by whether their political party is in power than say…how much money companies inside the stock market index are making.

The bad news is that leading up to mid-terms—which we have been doing—the markets do not do well. US Bank research notes, “The average annual return of the S&P 500 in the 12 months before a midterm election is 0.3%—significantly lower than the historical average of 8.1%.”1 This year has been even worse.

The good news is that right before and soon after the mid-terms, markets tend to turn around. Eddy Elfenbein points out, “Since 1962, the nine-month span encompassing the fourth quarter of the mid-term election year (starting now, October 1) to the first half of the following year (through June 30, 2023, in this case) has averaged a 20.5% gain for the S&P 500, and 27% for the Nasdaq.”2 Research from Charles Schwab goes back even further and is also market positive: “In 17 of the 19 midterms since 1946, the market performed better in the six months following an election than it did in the six months leading up to it.”3

Notice what that does not say. It doesn’t say anything about Republican elephants and Democrat donkeys. This is likely the most important thing you need to know.

You can argue politics and have important reasons for doing so, but you can’t argue with data. The records show that the stock market has done quite well during mid-term elections regardless of who wins. The above chart from Fidelity confirms this and gives an encouraging dataset—not only is the market average quite a bit higher than other election periods, the downside has been much smaller.4

Why would performance not be partisan? One of the primary reasons tends to be that the market likes the clarity of election outcomes over the uncertainty of who might be in or who might be out.

Ok. For the political junkies among us, I’ll give you what you want.

Let’s set the stage first. Betting websites are showing that betting odds highly favor Republicans winning the House and have for some time.5 On the other hand, Senate control has swung back and forth dramatically between parties a bit in 2022. It began the year strongly favoring Republicans, switched in the summer to the Democrats, and now is getting much tighter.6

Remember, these aren’t polls. These are betting odds where people are putting their money where their mouth is. Of course, like polling failures, the only thing that counts is actual votes. Additionally, there is plenty of time for politicians and candidates to say and do some foolish things before Election Day.

C’mon though, Stockman. (Pun intended). Give the readers what they really, really want. What happens to the stock market in any election cycle when my party wins?!?

Here goes. Data from LPL Financial has shown stock market performance since 1950 to be: “…13.4% when Republicans held both chambers, and 10.7% when Democrats had control.”7 The edge tilts toward the elephants, but not by much.

Don’t get too thrilled though, Republican readers. Some of this depends on how you slice it and how many variations you want to add. For example, if you factor in the White House, since 1945 stocks have done the best with a split congress and a Democratic President.8

And the donkeys cheer! Hold up…I hate to be a party pooper, but this political scenario has only occurred a total of four years.

Some have argued that split governments are best for stocks, but one Wall Street Journal reporter points out: “Since the 1928 election, there has been virtually no difference in the annual return of the S&P 500 in years when one party controlled Washington versus periods when power was split.”9

Of course, the big question is, should any of this matter for investors? While history is informative and past data has a way of busting up our assumptions, it is not a promise of the future. We should learn from these data points, but it should not be the primary driver of investment decisions.

Your investment decisions should be driven by the stuff you won’t find on political television or social media sites. Boring stuff like your risk tolerance, your future goals, your cash flow, your debt, your investment objectives, your time horizon, your account registration, your tax situation, etc.

Politics matter, but don’t let it drive your emotions or your portfolio decisions.