The Rise & Fall of the Most Valuable Companies in the World 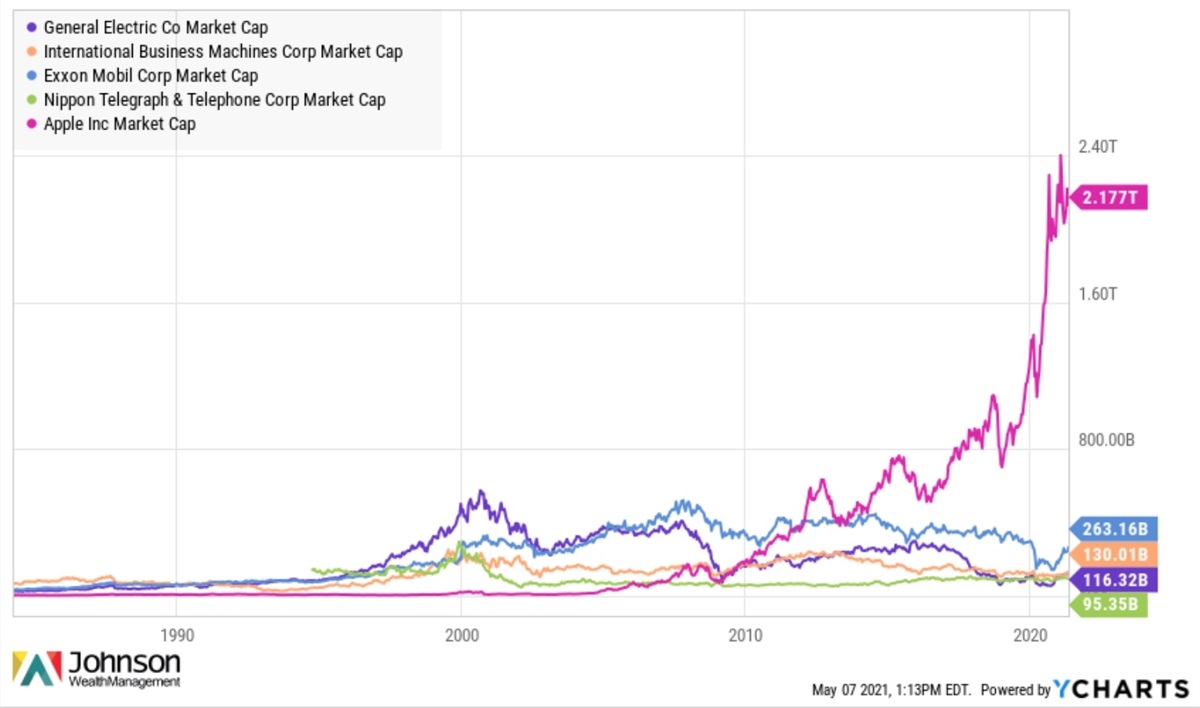 How does one even define what the most valuable company in the world is? One commonly used metric to get this valuation is through something called market cap.

The market cap of a company is what stock market buyers and sellers say the company is worth in real time. Technically speaking, it is the number of a company’s outstanding shares multiplied by the price of the stock. For example, at the beginning of May 2021, if you take all the outstanding shares of Apple stock (AAPL) and multiply it by the price, it’s market cap is around 2 trillion, give or take a measly few hundred billion.

Whether or not it is “really” worth that on a given day is up for debate. It’s been said that the stock market is simply a gauge of rich people’s feelings. That’s overstated, but point taken. Sentiment matters a lot in the stock market. Sentiment also shifts. So do companies’ profits, assets, liabilities, and products. What traders think about a company and whether a company’s fundamentals thrive, stagnate, or die evolve over time.

Throughout the decades the largest company in the world doesn’t keep that title forever. Peter Mallouk, founder of a large RIA firm, noted this in a recent tweet:

“Largest Company in the World

One gets a visual on this via the above chart which shows the market cap of these five companies over the last five decades. Most obvious is how spectacularly Apple’s market cap towers over them all even at their highest peaks. But Mallouk’s point is relevant: each company had their day as el numero uno but eventually another company took its place at the top. The highest valued company of the present does not usually remain the highest valued company of the future. The past teaches us the prudence of portfolio diversification.

It’s likely that Nippon Telegraph doesn’t make up more than 10% of your portfolio right now (and you may have never even heard of it), but your Apple position might be so big that its performance dictates the direction of your portfolio. In no way am I saying that Apple shouldn’t remain a large part of your portfolio, nor am I recommending you buy, sell, or hold it, I’m making the point that historically companies, like empires, rise and fall. Remember that.