Investing is Not a Casino

Ain’t the stock market just a casino for people that say they don’t gamble? Generally, no. Here are two reasons:

First, investing in the stock market is investing in companies in the real world. You aren’t pulling slots hoping the numbers align. You are owning a share of a public company. And if you are invested in index or mutual funds, you own slices of several companies. The goal of these companies is to grow and for their shareholders to participate in that growth. Besides, you probably are reading this article via products produced by said companies. Much more tangible than gambling.

Second, the longer you stay invested in the stock market via the S&P 500 the greater your chances of earning a return. Check out this chart1: 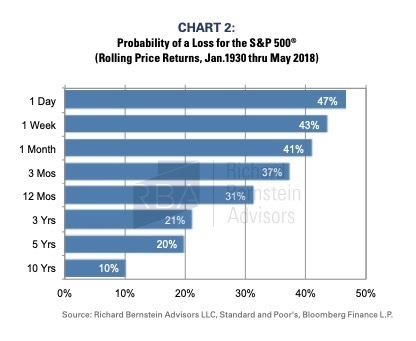 Notice how the length of time in the S&P 500 increases the probability of a positive return. Day-trading is more akin to a casino. Or at least a coin-flip. The chance of a loss is nearly half in a day and takes a year to get that chance to a touch under a third.

By the time you get to the three-year mark, you’re getting closer to an 80% chance of a positive return and increasing to 90% after a decade. Though this chart doesn’t show it, 100% of 20-year periods in US markets have had positive returns.2 Obviously, probability is not a promise, but comparing investing in the stock market over the long term to a casino does not stand up to scrutiny.

Remember, your role as an investor is to be a gardener not a gambler. The goal isn’t to strike it rich in the lottery via a get-rich-quick scheme, but to consistently plant your dollars in an array of publicly traded companies during good and bad economic seasons alike year after year. It’s likely the seeds you planted throughout the seasons will reap a harvest.