Corrections, Bear Markets, & Your Future Self 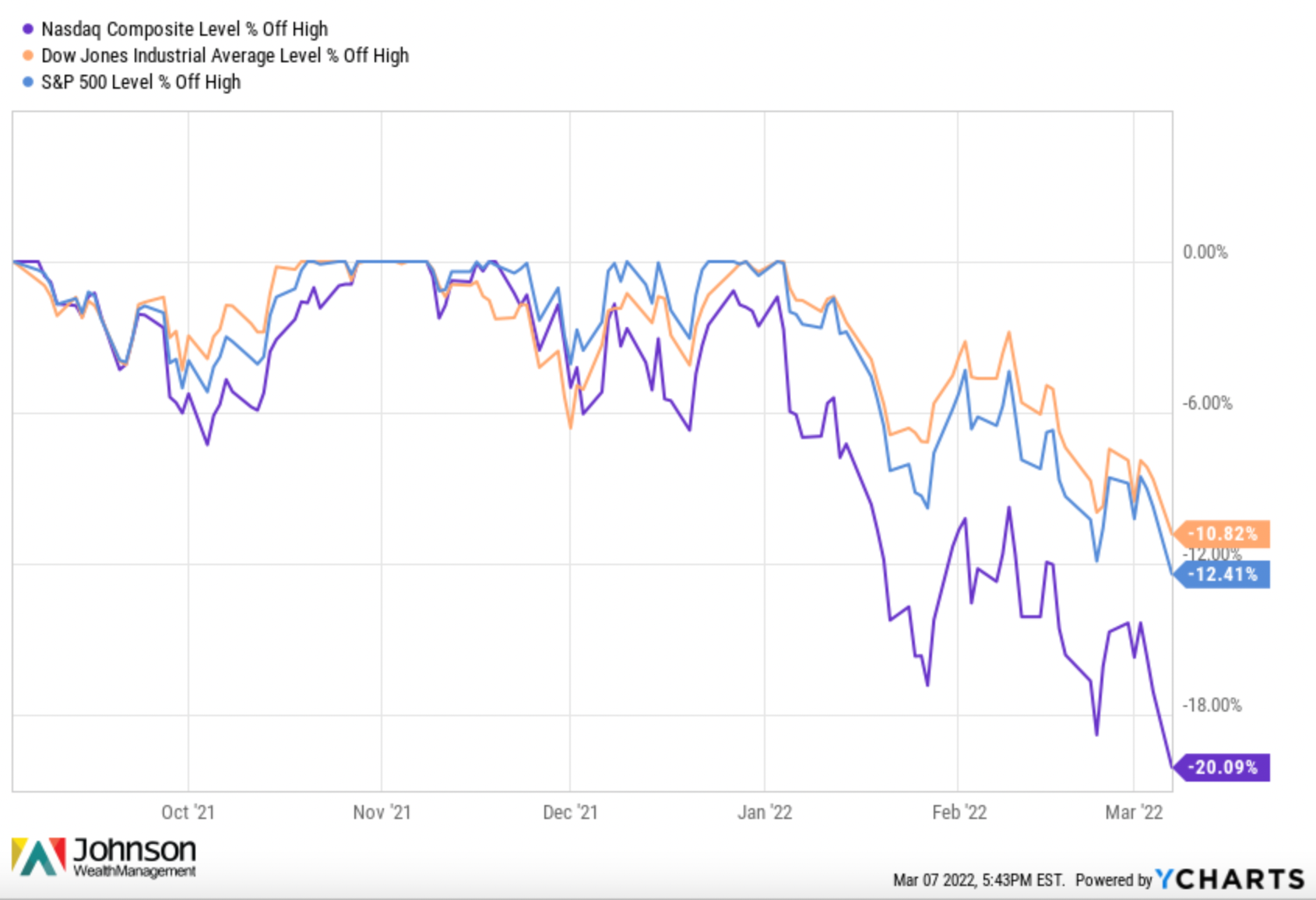 I wrote this about one week ago.

Depending on how your week went, last Monday may feel like yesterday or a long, long time ago in a land far away. When I think about my future self-one week from today, my guess is that markets were volatile, and my week was full of doing my best to react or—often better—not to react in client portfolios.

At the close of trading on Monday, March 7, 2022, you may have heard that the DOW and S&P 500 were officially in “correction” territory, and the NASDAQ was officially in a “bear market”. You might have heard those terms thrown around a lot this past week from financial media. And you may wonder what in the world they even mean.

I like the way the great WSJ financial writer, Jason Zweig, defines them in his satirical book, The Devil’s Financial Dictionary:

Correction, n. A moderate decline in the market that the people who think they have recognized it believe will not last much longer. It could, however, turn out to be the beginning of a full-blown BEAR MARKET, nothing but a DIP, or the beginning of a BULL MARKET. Only after it is over will anyone know for certain what it was.

The commonly used meaning is a decline of no more than 10 percent, although there is no official definition of a correction. Investors should note the connotation implicit in the term: that something about the market’s behavior needed to be “corrected,” as if it were somehow inherently wrong for prices to be rising. (Page 60, Kindle Edition)

Bear Market, n. A phase of falling prices when you can no longer bear to think about what a fool you were for not selling your investments—which is generally a sign that you should think instead about buying more. A period of falling prices inevitably sets the stage for a period of rising prices. See also BULL MARKET.

A bear market is commonly believed to begin when a stock-market average or index has fallen by at least 20 percent. But, in fact, there is no official definition or threshold—still another reminder that reality on Wall Street is just a state of mind. (Page 21, Kindle Edition)

What does this mean for you? What actions should you take due to corrections and bear markets?

The action or inaction that most likely benefits your future self—not your present self.

By the time you’re reading this, the market indexes may be as bad as last week, much better, or a whole lot worse. But you know what’s more important than what’s happening right now in the market?

Your response to it.

Think about your future self before you make any investment decision. It can be so easy to get caught up in the moment—flooded by negative emotion in the short term—and make a decision that can have an adverse impact on your future self and your family over the long term.

And if you need help not doing that, we are here to develop a plan for you and your family.

I may have written this a week ago, but considering how the decisions you make today impacts tomorrow is timeless.